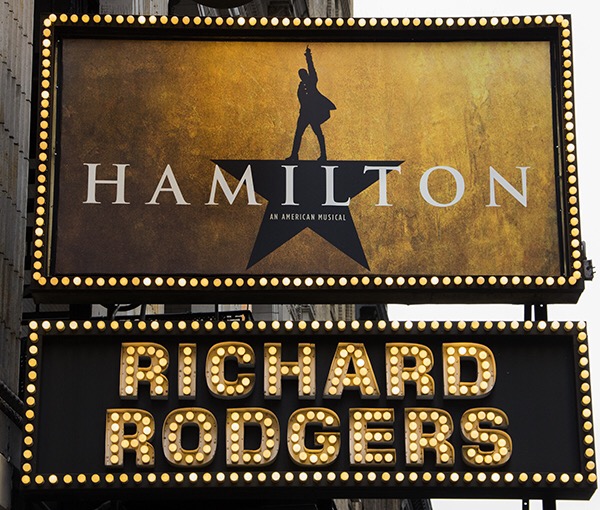 It’s a cultural phenomenon more akin to blockbuster movie franchises or Harry Potter-esque literary sensations than traditional theatrical success. Broadway’s HAMILTON is surrounded by the kind of hype and hysteria not seen with with regards to a stage production since Rent opened in 1996.

Hamilton is even bigger than that, thanks in no small part to the rise of social media within the last 20 years: the show’s genius creator and -until recently- star Lin-Manuel Miranda is an expert manipulator of Twitter, posting regular updates from backstage at the blockbuster show as well as enormously enjoyable footage of the Ham4Ham events (despite being sold out up to a year ahead, the show has a lottery whereby the very front of the Orchestra Stalls sells at $10 a seat, and this is accompanied at least once a week by a live performance in the street outside the theatre by Miranda and guest stars as disparate and stellar as Patti LuPone, Glee‘s Matthew Morrison, Lea Salonga, Billy Porter, George Takei, members of the Big Apple Circus, Sara Bareilles and Steve Martin.)

Wicked and The Book Of Mormon were, and continue to be, international smash hits, but Hamilton even out-blockbusts them, having enjoyed a critical success (topped off by a Pulitzer Prize and 11 Tony Awards) not afforded the former, and, with its inventive and exhilarating use of contemporary musical forms such as rap, hip hop and beat box, appealing to a younger demographic than the joyously foul-mouthed latter.

In UK terms, probably the last time we saw anything approaching this level of stage success would have been back in the 1980s when the mega-hits Les Misérables, Phantom and Miss Saigon opened. It will be fascinating to see how the West End edition of Hamilton fares when it arrives in 2017, reopening the extensively refurbished Victoria Palace. You can sign up for advance notice of ticket sales at http://www.hamiltonthemusical.co.uk    and it’s probably worth doing as the advance buzz is already pretty immense. What will undoubtedly happen, as with the London Wicked and Mormon, is that moneyed Americans unable to get seats for the NYC or (soon to open but already sold out) Chicago productions will come over to London to see what is essentially a carbon copy of the show. Thanks to our Brexit pals, they will also find it all an absolute bargain, especially in comparison to the $2000+ price tag on Black Market tickets for the Broadway show. My bestie American, The Divine Pam, is already all over the London production, so to speak.

I was in NYC the week before Lin-Manuel Miranda, Tony-winning Leslie Odom Jr (playing Hamilton’s rival and, ultimately, fatal nemesis, Aaron Burr) and leading lady Phillipa Soo played their last performance, and the level of excitement -no doubt buoyed by an impressive win of 11 Tony awards including Best Musical, Best Score, Book, Director, Choreographer, just a couple of days before- was at fever pitch. A tent city had sprung up outside the Richard Rodgers Theatre with people camping out for up to a week in the hope of getting their hands on cancelled or returned tickets, and the first question anybody asked in bars or restaurants once they’d established that you were visiting and were reasonably theatre-savvy was “OMIGOD have you got tickets to HAMILTON??!” On more than one occasion after I’d replied in the affirmative, I was treated to the response “It. Will. Change. Your. Life.” Upon further questioning, it turned out that few of the people who made this extravagant claim had actually seen the show (“well, no…..I can’t get a damn ticket”) but they all knew the cast album verbatim. Even in a city as Musical Theatre-crazy as NYC, I don’t recall ever hearing songs from a Broadway score popping up on the playlist in mainstream bars, but that is the case with Hamilton, most notably the infuriatingly catchy Destinys Child-like ‘The Schuyler Sisters’ number (“WORK!”)

So, was my life changed?  Not quite…….but there’s no denying that Hamilton is a fine, accomplished, satisfying night in the theatre. I have never heard an audience react like quite like this. They went nuts when each lead character came onstage (Miranda’s first appearance literally stopped the show dead in it’s tracks for about 2 minutes) yet were utterly silent and attentive when required (during the tiny break in the gorgeous ballad “Burn” in Act 2 you could have heard a pin drop.) It is unbelievably exciting to be present ‘in the room where it happens’ to borrow a phrase from one of the many knockout numbers, even if it ups the ante to an extent that you wonder how anything can live up to this level of expectation.

And yet, it mostly does. It is a work of art, but not in a pretentious, rarified way. It is mass populist, crowd-pleasing, exhilarating …..but also fiercely intelligent. A bold, often thrilling, surprisingly elegant and delightfully witty embrace of a show, that works on several levels at once. It is a history lesson about the beautiful experiment that is America that engages the heart as much as the mind, and is staged by Thomas Kail with a wit and panache that are seldom, if ever, seen in such a blockbuster piece of entertainment.

The cast I saw were uniformly wonderful. Not just Miranda himself -an utterly engaging performer that makes it look so damn easy even when you know it can’t be- but all of the leads and even right down to every last member of the ensemble, each of whom register as a distinct and individual personality as they whirl through Andy Blankenbuehler’s excitingly inventive choreography. If I’m 100% honest I don’t personally think Leslie Odom Jr and Renee Elise Goldsberry deserved to win their respective Best Actor and Featured Actress Tonys over Zachary Levi and Jane Krakowski in this season’s She Loves Me which is not to say that they aren’t brilliant -they so are- but I think any number of actors could deliver what they are doing, which is just as well given the international life that this show will inevitably have. The performer that will be hardest to replace, in my opinion, is Daveed Diggs, a swaggering, rapping, cheeky, idiosyncratic, hilarious, adorable human dynamo in the duel role of Lafayette and Thomas Jefferson. You cannot take your eyes off him. Broadway contracts being significantly different from West End ones, performers can leave with little notice and it was announced just yesterday that Diggs will depart the Broadway cast at the end of this week. His loss will be keenly felt I think.
On a technical level, Hamilton has the best lighting and sound designs I think I’ve ever experienced in a theatre. It just looks and sounds utterly gorgeous. I’ve heard the expression “sculpting with light” many times but Howell Binkley does just that. His work is dazzling.

The combination of (beautiful) period costumes with contemporary hairstyles and attitudes gives the whole show an edge and aesthetic that is unique and refreshing, matching Miranda’s enthralling score which has the American founding fathers expressing themselves in rap and hiphop while England’s King George (hilarious Rory O’Malley…….the only lead I saw who was not part of the original cast) gets an infuriatingly catchy, subtly venomous 60s pop pastiche.
If I wasn’t quite as moved as I thought I’d be it’s mostly because the whole thing is so damn clever you’re sitting there marvelling at the ingenuity and invention rather than getting caught up in the human stories. I wouldn’t have missed it for the world though, and will be first in line to buy tickets for the London version. Having said that, it inevitably won’t resonate outside the USA in quite the same way, but work this fine has to travel and be seen globally. In a world that seems to be going to hell in a handcart at the moment, there is something deeply comforting about the fact that the public at large is embracing a piece that is as smart, big-hearted and inventive as this one. A beautiful juggernaut.